At long last, a book of mine that has been in preparation for quite a long time has officially appeared (see here for the official website – note though that on the webpage they missed the correct title of the book as you can see from the cover below…). 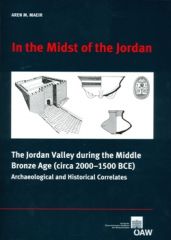 The volume (Maeir, A. M. 2010. In the Midst of the Jordan: The Jordan Valley during the Middle Bronze Age (ca. 2000–1500 BCE) – Archaeological and Historical Correlates. Contributions to the Chronology of the Eastern Mediterranean 36. Vienna: Österreichischen Akademie der Wissenschaften) does not relate to the excavations at Tell es-Safi/Gath, but rather, is an outgrowth of my PhD research (HU 1997) which dealt with the Central Jordan Valley during the Middle Bronze Age. This volume is an expansion of the PhD research, including a study of the entire Jordan Valley (from Dan in the north till the Dead Sea in the south), along with updated discussions of new materials and other issues.
Due to the enormous volume of material relevant to this topic, there is not an-depth discussion of every tomb, vessel and find from the MB in the region, but rather a regional overview (including an in-depth geographical, ecological and environmental summary) and discussions on the relevant archaeological and historical data, both specifically within the Jordan Valley, but also the ramifications of these finds on other regions (and issues) in the Middle Bronze Age, and vice-a-versa, influences of other regions and sites on the Jordan Valley. For example, aspects of the chronology (including an appendix on 14C dates from the Jordan Valley by my good friend Dr. Ezra Marcus), trade, foreign relations, technology, production, origin and development and other issues are dealt with. Clearly, many issues which deal with larger topics that have been extensively discussed in Middle Bronze Age studies are broached. The discussions include a survey of the various classes of material culture (with a clear presentation of representative groups of pottery throughout the various stages of the period), and a detailed list of all-known sites from the period in the region.
Briefly stated in this volume you can find out anything you always wanted to know about the Jordan Valley but were afraid to ask…
So, if you don’t have what to do with 64 Euros – go ahead and buy it before the press runs out of the printed copies and the book becomes a hard-to-come-by collector’s copy!