We’ve been holding this under wraps for the last week and a half, but now that we are ready to take it out and the local and international press has been informed, it is now time to disclose that since the end of the 2nd week Amit Dagan and his extraordinary team (who have been working double shifts on the site for the last week and a half!) have been excavating in Area D, in addition to the “regular” fantastic finds from the destruction level, a beautiful horned stone altar! The altar, made of one block of stone (50X50X100 cm) has two horns (not 4!) and a very nicely carved cornice on three sides. It is placed within a large structure which might be a temple (but it is too early to be sure).
There are many interesting points about this item, many of which can’t be discussed here, but I can mention a few:
1) It is the earliest stone altar from Philistia, a precursor of the many stone altars that are known from 7th century Tel Miqne-Ekron.
2) It is one of the largest altars known (save for the Tel Sheva altar [which though is made of many stones] and an altar from Ekron which was found out of context).
3) It is one of the earliest such altars from the Iron Age, save for those from Megiddo which are late 10th-9th cent. BCE
4) It has TWO and not four horns – quite unusual for such altars. This is VERY interesting, since this may very well confirm a theory put forward by our team member Louise Hitchcock that there is a connection between the Minoan/Cypriote “Horns of Consecration” and the horned altars – perhaps brought by the Philistines.
5) Its dimensions are virtually identical to the dimensions of the incense altar in the biblical tabernacle (1X1X2 cubit) in Exodus 30!
6) Quite surprisingly, the back part of the altar, and part of the top is unfinished! While the back part might have been “built-in” to a niche behind it (and this could explain the unfinished parts) the top is hard to explain.
7) No evidence of burning or residues were found on top of the altar, although a very nice Cypriote “Black on Red” flask was found right near it. Perhaps it originally stood on top of the altar!
8) Surrounding the altar we found large concentrations of various types of vessels and several concentrations of astragali.

Needless to say, there is a lot more stuff to be discussed!

Here are some pictures:

Here is MiYoung Im working around the altar

Here is a view of the altar from the back – note the unfinished parts! 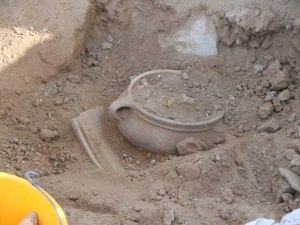 Here is a complete cooking pot which was found in a room just next to the altar – one of scores of vessels found in and around this area.

And here is a picture of me, the proud father – note the smile!

Just to mention one of the jokes that have been going around in relation to the find:
that is not me in the picture – it is my “altar ego”… :-)

36 thoughts on “The news is out! A large stone altar in Area D”